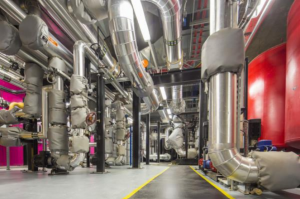 The site is a mixed-use development and consists of 50 new buildings, 2,000 new homes, 20 new streets, 10
new public squares and 67 acres attracting 45,000 people who live, work and study in the area. It is Europe’s
biggest city centre regeneration scheme and the largest piece of Central London to be developed, under
single ownership, in the past 150 years.

The focus for energy efficiency and sustainability at the site is the on-site Energy Centre. The centre houses a
6MW Combined Heat and Power (CHP) plant and is one of the largest of its kind in the UK. Once fully
operational, the CHP plant will provide 100% of the development’s heat and hot water needs and 80% of its
electricity.

Other renewable technologies like solar panels are also being used here. The aim is to reduce carbon
emissions by at least 50% relative to 2005 levels.

The main energy centre comprises three 2MW GE Jenbacher CHP engines and three 10MW gas-fired boilers
to provide heating, hot water and locally generated electricity to the development. It was constructed in
phases to facilitate the expansion of the development. The first phase, which saw the commissioning of one
of the three CHP engines in the energy centre, was completed in July 2012. Phases 2 and 3 of the project,
saw the second and third CHP engines installed and commissioned in 2014.

The energy centre consists of: two 2MVA combined heat and power (CHP) engines; three 10MW gas boilers;
two 3MW gas boilers; and two 75m3 thermal stores. It meets 99% of the development’s current heat
demand, with a 50% saving in carbon emissions over traditional utility solutions. The CHP engines also help
drive the generation of cooling.
The scheme has delivered higher-than-planned heat-generation efficiencies, achieving a CHP Quality
Assurance Certificate with a QI score of 116.46, which is 10 points above the expected level. CHP Quality
Assurance is a government initiative that monitors energy efficiency and environmental performance.

The purpose of the trial is to establish the conductivity and dissolved oxygen levels in the primary loop of the
district heat system. As explained further in the report, these parameters are important to minimise
corrosion of the pipework and associated equipment. It can also be used to indicated system losses and
trends.

Hydro-X’s pioneering new Hydro-Net multi-parameter water quality monitor for networks is a brand-new
approach to smart sensor technology, with amazing capabilities. It is a modular approach to the distributed
collection of water quality data. The Hydro-Net allows ‘no compromise’ continuous measurement of all the
main water quality parameters you need to measure in water system networks. 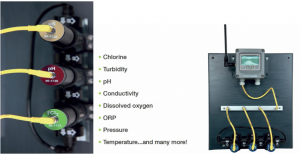 A series of laboratory-scale corrosion experiments was carried out to observe the effect of dissolved oxygen
(DO) in the presence of other water quality parameters, such as hardness, Cl-, and pH using various pipe
materials. In addition, a simulated loop system was installed at a water treatment plant for pilot-scale
experiment. Laboratory-scale experiment showed that corrosion rates for galvanized steel pipe (GSP),
carbon steel pipe (CSP), and ductile cast iron pipe (DCIP) were decreased to 72%, 75%, and 91% by reducing
DO concentration from 9±0.5 mg/L to 2±0.5 mg/L. From the pilot scale experiment, it was further identified
that the average ionization rate of zinc in GSP decreased from 0.00533 to 0.00078 mg/ cm2/d by controlling
the concentration of DO. The reduction of average ionization rate for copper pipe (CP) and stainless-steel
pipe (SSP) were 71.4% for Cu and 63.5% for Fe, respectively. From this study, it was concluded that DO could
be used as a major parameter in controlling the corrosion of water pipes.

Despite the efforts of organisations such as CIBSE and BSRIA, there remains considerable misunderstanding
of the causes of corrosion in closed systems and of the best way to prevent it from happening.
The primary cause of corrosion in closed water-based heating and cooling systems is dissolved oxygen.
Without it, the cathodic half-cell reaction of oxygen reduction cannot drive the anodic part (the dissolution
of metals). The use of chemical inhibitors has its place, but should be considered a secondary line of defence,
not a substitution for resolving oxygenation problems.
An example of the corrosion of a steel pipe brought about by excessive dissolved oxygen (DO) can be seen in
Figure 1. If we accept that dissolved oxygen is the primary issue, what causes this and how can it be
prevented?

There are three main ways oxygen can enter a closed heating or chilled water system:

• From aerated water – initial water fill, flushing or fresh make-up water during operation
• From pressurisation problems – negative pressures at the top of systems results in air being drawn in
through air admittance valves (AAVs) or seals
• From oxygen diffusion – through breaking int systems (i.e. Working on plate heat exchangers) and
the use of non-barrier plastic pipework.
Aerated water from the initial fill cannot be avoided but, providing there is carbon steel in the system, the
high levels of dissolved oxygen – around 10ppm depending on temperature and pressure – are quickly
consumed, resulting in a superficial ‘flash rusting’. Some installers are tempted to use stainless steel
pipework, but this can make the problem worse by allowing the DO to remain high, and focusing corrosion
on other components with little surface area, such as brass valves. 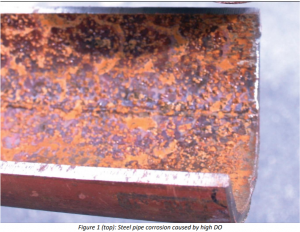 Also, although flushing with water is usually necessary to clean the inner surfaces of debris, repeated
flushing should be avoided because each flush introduces yet more oxygen into the system.
Systems need to be pressurised properly throughout the 24/7 cycle. Expansion capacity needs to be
specified correctly, alongside system pressures, and these need to be maintained over the system lifetime.
If they aren’t, system pressures may exceed the pressure relief valve (PRV) settings, resulting in water losses
and the need to top up with fresh, aerated water. However, if system pressures are too low, this could result
in air being sucked into the system.
Hydro-X Water Treatment Ltd, Part of the Hydro-X Group of Companies: Compliance House, Manor Drive, Dinnington, S25 3QU
Company Registration – 1818133

In the UK especially, water treatment (pre-commission cleaning and dosing with biocides and inhibitors) has
been the preferred approach. BSRIA guidelines require water samples to be taken at regular intervals during
commissioning and, after handover, use of the analysis to judge the condition of the system and the water
treatment required. Although this approach has merit, and BSRIA guidance should be followed, water
sampling alone has several significant deficiencies:
• It is prone to misinterpretation
• It is only a snap-shot view, which can miss sudden and catastrophic changes
• It only highlights a potential problem and not its root cause – especially mechanical integrity issues
• It requires semi-skilled operatives to visit site at regular intervals.
One of the main reasons for misinterpretation is that low readings for dissolved solids – particularly iron – is
taken as evidence that corrosion is not occurring. However, because it is insoluble, magnetite does not get
detected by water analysis when it forms in systems.
What is needed is an approach that determines the condition of a system accurately, while overcoming the
deficiencies of water analysis. This is where continual and remote monitoring of system parameters comes
in. Such an approach will not only inform commissioning and maintenance companies of the condition of
their client’s systems but – if implemented properly – will identify the root cause of any problems.
Ideally, monitoring equipment should be fully integrated and easy to install. It should provide regular
measurement of all key parameters of a system, and send out alerts if critical levels are exceeded before any
damage occurs. A monitoring system can check continuously on engineering aspects, water characteristics
and corrosion rates

Below is a corrosion rate table for steel pipework. As you can see the corrosion rate increases with
temperature, even at a lower level of dissolved oxygen. It is recommended to run at a maximum of 1.5ppm
of D.O in your system 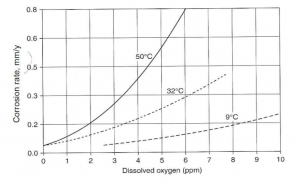 Talk to us today about your project requirements